skip to main | skip to sidebar

I'm a little late this month but here goes! The following is what I posted on my personal site. Here's to learning how to bake!


The past month or so I have become addicted to food blogs. I can't decide if I'm wasting hours or if it's continuing ed since I'm on summer break from culinary school (I'm just trying to justify myself). While I was checking blogs, I came across Daring Bakers. I'm not the best baker, and I far prefer cooking to baking, but the idea intrigued me. I signed up and June is my first month as a member. It's been a little crazy around here and so I'm late on my post, but here is my first attempt at Daring Bakers. I'm going to start a baking blog to post the upcoming challenges - but for now you will all get to see how much I really have to learn!

The challenge this month was to make a Danish braid. I wasn't as overwhelmed as I'm sure I'll be in the future - I've made a Danish Braid before in class, but I soon realized that making pastry in class with a pastry chef is much different than making it at home. I also realized that I need to read the entire recipe thouroghly before making it, especially if I'm planning on serving it to 12 hungry teenage boys. I had originally planned to make it for the boys - but it wasn't until after I completed the 4 turns that I remembered the dough needed to be refrigerated overnight. Oops! 2 dozen Winchell's doughnuts saved the night.

When making the pastry we were able to alter the recipe according to our preferences, so instead of making the apple compote filling, I opted for a fresh peach/blueberry combination (I prefer fresh fruit instead of cooked fruit). Because I used peaches and blueberries, I used lemon juice and lemon zest in the pastry instead of orange juice. All in all, I think it turned out pretty well. 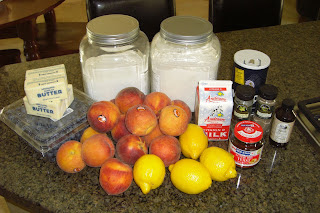 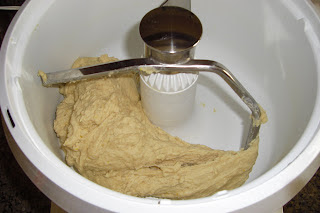 Mixing the dough. It was a little dry when making it so I added some extra water 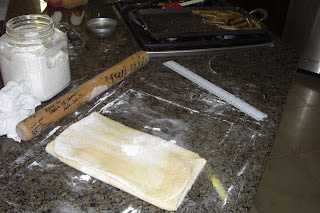 After one of the four turns. For my bridal shower (6 years ago) everyone wrote marriage advice on two rolling pins and I've loved it. Every time I bake, I think of all my friends from Fairfield. 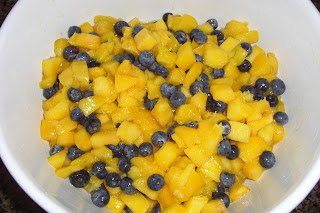 Day 2 - mascerating peaches and blueberries. I'm sure there are better tasting flavor combinations, I was just going for flavor and texture. Look how pretty! 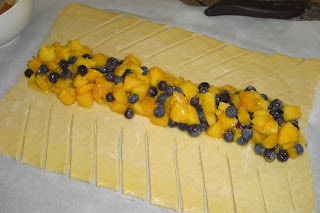 Making the braid. I decided to make 3 braids from the dough instead of 2 so I didn't roll out the dough to the exact measurements. My first one I forgot to make sure I had the same amount of cuts. Oh well. It ended up looking pretty. 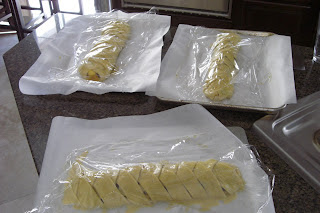 Proofing the braids. I forgot to take pictures of the completed braids before I added the cream cheese frosting so I had to post this picture to show that I do know how to braid. 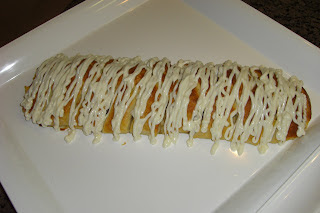 Yum! One day and several hours later we enjoyed the final product. For anyone who wants to make this in the future, parchment paper makes life a lot easier. If anyone would like to check out other daring baker's creations, click here.

I'll be posting all the rest of my daring bakers posts on my new site. More to come
on that later...hopefully!
Posted by Sara at 10:42 PM 1 comment:

I signed up for daring bakers and needed to start a blog to post all of my baking experiments. We'll see how this goes!
Posted by Sara at 4:43 PM 2 comments: